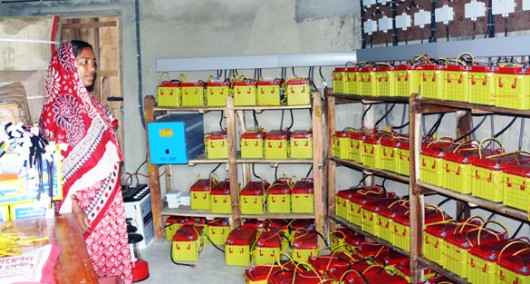 ‘Off grid power’ was unknown concept in the Eastern Indian state of West Bengal, even to the power engineers, when off-grid solar power first made its presence felt, in 1992, in the homes of 126 families in Kamalpur, in the Sunderbans. Many called it an “absurd venture” with little expectation of success from the West Bengal government that put the demonstration in place.

However within a decade, 18 similar minigrids – a local grid catered by local generation and supplies power to limited number of households – were replicated in various other islands of Sunderbans like Patharpratima, Gosaba, Kultali with power reaching more than 10,000 homes. Today, minigrids coupled with standalone solar modes – a thatched roof with solar panels planted on the roof – is a common sight and provides off-grid power to around 230,000 families and almost a million people. This is more than one –fifth of the total population in the Sunderbans. The Central Government has invested more than INR 1 billion so far to encourage solar power in Sunderbans since 1992.

The experts opine that the potential for off-grid solar in Sunderbans to expand is much more than is being currently realized. It is “almost techno physically impossible” to reach grid power to nearly one third of the human habited islands and around 2 million people in the pristine islands bordering Bay of Bengal. Off-grid here is the only option and a captive market.

Sunderbans, an unique ecosystem at the southern fringe of West Bengal, is a network of 102 islands out of which human habitation exist on only 54 islands. It is a transboundary ecosystem and shared by neighbouring India and Bangladesh. The area is also an UNESCO site mainly for its unique mangrove forest and rich biodiversity, with tigers being the iconic animal. Sunderbans is also a climate hotspot with increasing frequency of high intensity tropical storms and continuous sea level rise.

“Solar and other alternate power business in Sunderbans can go up to over INR 10 billion or 200 million US dollars” explains eminent solar energy expert S P Gon Choudhury. Gon Choudhury introduced solar power in Sunderbans, a first in providing electricity in remote rural areas through local grid solar PV in India. “There must be about half a million families where grid power is difficult to be reached and off grid solar or biomass is the only option” he added.

The “only option” situation arises because many of the islands are quite far-flung. In these situations carrying both overhead, as well as through river grid network proves extremely difficult. While frequent storms negate the overhead option, navigability in the network of rivers cancels out the “through river networks”. “Taking network in marine cable is possible but extremely cost intensive” state experts.

Despite the early beginning and immense potential, solar in Sunderbans has not prospered in last two decades as it could – or, should – have. “Lack of political and administrative will is one of the main reasons, we never wanted to invest as much in solar as we had done in promoting thermal power driven conventional grid” claims Sujoy Basu, an alternate energy expert and former professor of Jadavpur University. That also explains lack of adequate financial subsidy to both manufacturers and users in state, and why companies have chosen to go other states to promote solar. Recently there was a complete u-turn by state government on a project for promoting biogas driven mini grid power in five Sunderban islands. This was done after the project received central grants, project promoters were shortlisted, and after the tendering process was completed, as the state opted to work instead with developing grid connected power.

Though governments have not been able to provide the support and trigger that the region deserves – especially in context to country target of producing 20,000 megawatt solar by 2022 – local need, and the markets response has ensured that solar continues to grow in the Sunderbans. Off-grid connected and stand-alone solar households today cover around one-fourth of the island population, and a number of small to large companies are in the market to meet this steadily growing demand. There is no direct financial incentive or subsidy provided, but people get loans from institutions such as the Grameen Bank to go solar. Off-grid solar is pursued by non-profits organizations, with poverty alleviation targets in mind. NBIRT – a solar institution led by Gon Choudhury, after his retirement from the government, recently initiated solar toilets in public places including schools and hospitals where WWF-India had also started a unique model of a wireless minigrid projects. In this, solar charged batteries are given to individuals who have been registered with the project. The incidental cost is borne by a local committee who also agree to take care of maintenance required. Similarly, Bill and Melinda Gates foundation supports projects that aim to reach solar to 150 thousand households. Actions like this can contribute to removing the risks associated with financing ‘new’ ventures such as off-grid solar in the Sunderbans. In so doing, it can provide the baseline required for public incentives to step in and further leverage the market potential.

The West Bengal State government, in a recent announcement, has stated that it aims to generate 65MW of solar power by 2017 and 500 megawatt in 2022. But the drive to convert such ambitious announcements into actual ground reality is still missing. “We should learn from Pacific Islands like the Marshall Islands, Fiji, Solomon Islands how solar minigrids can be successfully promoted. In Sunderbans we started early but could not prosper, as we should have. But everything is not lost yet, especially in context to the ambitious solar plan that the country pursues now mainly to combat climate change” said Gon Choudhury.

But this cannot be done until policy-makers, civil society, and the market work together.