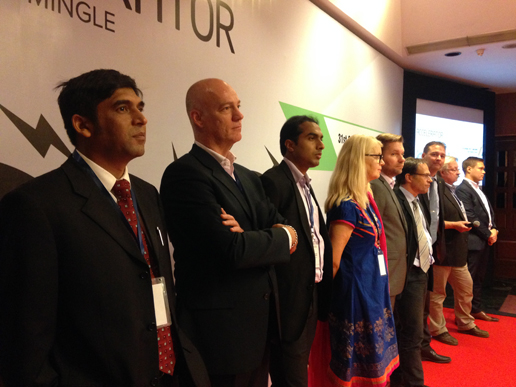 Delhi discussions confirm that Sweden companies are committed to working with India. Partnerships are underway and the interest to expand is strong.

The India Habitat Centre held the B2B meetings, set up by the Confederation of Indian Industries- Green Business Centre, between 9 am and 4 pm. With a short coffee break, the day continued with a full house for an Entrepreneurs meet and mingle, organised by The Indus Entrepreneurs Network (TiE) and Business Sweden. The Delhi discussion focused on how the technologies presented by Sweden, could be brought on to the Indian market. As was made clear by the Swedish Energy Agency during the evening session, many of the Focus Group 3 companies are already making good on their commitment to come to India.

Scania’s commitment to working with India was exemplified with the launch of its first ethanol bus for commercial operation in India, in Nagpur on August 29th, 2014. The Union Minister for Road, Transport and Highways – Nitin Gadkari cut the ribbon and this is India’s first bus run on ethanol. Mimer Energy AB has an Indian concern undertaking business; Maksus Mimer Energy, that focuses on geo-thermal energy. They are operational in Manali and are looking to extend their partnership throughout the country. FOV Biogas has commissioned its first plant in Chennai, and is scheduled to have 2 more in the next month. HiNation has started work in India and has already provided lighting for over 900 families in rural India.

FG3 will end in Mumbai on November 4th, 2014, but the 11 companies have their diaries booked with back-to-back bilaterals. The objective of the Accelerator programme is to catalyse partnership opportunities between India and Sweden. The daylong discussions in Delhi were a good example of how much has been done in relatively little time. It also reconfirmed the willingness, on both sides, to continue to expand the scope of India Sweden innovation.

Seeing is believing; The delegation reaches Mumbai
Scroll to top